Brendan Bjorn and I have something in common: we both have thin skin. His is literal. Mine is figurative.

Yesterday, after spending less than 3 hours in his wheelchair, Brendan developed the beginning of a new pressure sore about half an inch above his previous one. It developed despite having a dressing on it and despite being in his chair for such a short timeframe. I am heartbroken.

The skin is only slightly opened, but it will now restrict him to full bedrest.
AGAIN.

The weather is glorious today as I look out the window and see people out walking while cars go steadily by. The three of us won’t be going anywhere on this 3-day bank holiday weekend.
AGAIN.

Brendan’s skin in the area of the pressure sore is now very thin. So thin that it will most likely always be a challenge for him. Hopefully, after the spinal fusion this summer, it will relieve much of the pressure that his currently twisted spine is placing on his pelvic bone. Hopefully the sores will be fully healed when it comes time for this life saving operation – or it won’t be allowed to take place due to infection risk. We often survive on hope, I think.

Me? I also have thin skin…the figurative kind…which has been stretched and pinched and poked at the past number of days. When it comes to my feelings and what other people would do or say in an effort to cause me harm in some form, I’ve had thin skin for as long as I can remember. Things like this get under my skin, I internalise them, and once again in that figurative sense, I am brought to my knees. And in all honesty, I once again became so low that I wondered what was the point of going on. You see, when you already deal with depression and anxiety and then have maliciousness directed toward you, that thin skin doesn’t provide much of a barrier.

I sprayed a skin barrier called Cavilon onto Brendan’s pressure sore this morning after gently cleaning and drying the area. As I slowly rolled him back over, I mused wishing there was a skin barrier for emotionally thin skin. Then I looked up at him. He was looking down at me, smiling as he does so beautifully.

YOU are the protective barrier for my thin skin, I thought to myself. You and your brother, and the two of you are why I keep getting up off of my knees and carry on.

What an absolutely priceless gift he has given to me once again. 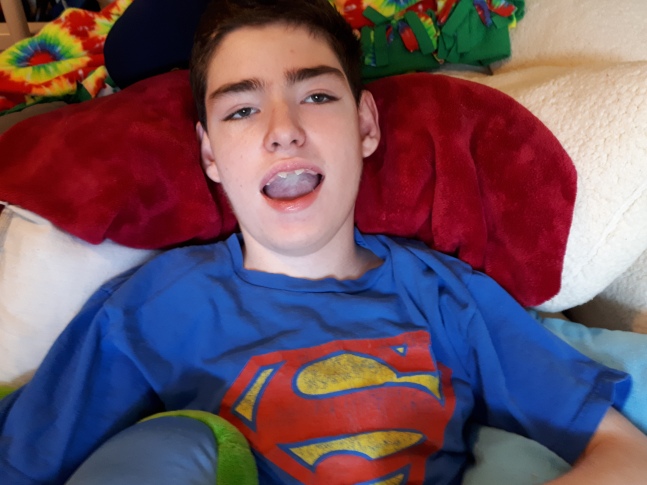 2 thoughts on “Having thin skin”